UNITED NATIONS DAY was observed in the form of Special Assembly at Indian School Sohar on 24th October 2019. Class VII F hosted the event. Swanandi Garudkar compered the special event. The assembly commenced with a prayer song, followed by a thought for the day by Anagha Lakshmi. Savio George updated the audience with the NEWS. It was followed by wishing the students who were celebrating their birthday on that special day. Snehal Nair.the school vice-captain, Satvik and Soumya Tiwari, the cultural captains presented the UN Badges to the dignitaries (i.e.) the Principal, the Vice Principal and the Supervisor (VI – VIII). The UN Song was sung melodiously as “The Song of the Day” inspiring the whole audience. Ananya delivered a brief speech on the United Nations with the aid of PPT. The speech was followed by the Model UN General Assembly in which speakers from five nations spoke on the topic “Ban on Single Use Plastic”. Niharika Surya of Class VIII G compered the Model Assembly. John Emanuel of Class VIII A, Andrea George of Class VIII F, Harit Mehta of Class VIII F, Nandhita P.V, of Class VIII C and Aman Saji of Class VIII B represented, The Sultanate of Oman, The United States of America, South Africa, Australia and India respectively. All the speakers highlighted the initiatives taken up by their countries on how to ban the single use plastic. This was followed by a PPT by Yash Sheth on highlighting the significant works of the allied organisations of the UN. This was followed by the Quiz, for which Trishita Chowdhury was the Quiz Master. The students participated enthusiastically and it was centered on the Works of different organizations of UN. The Principal, Mrs. Sanchita Verma, addressed the gathering and gave her message to the students about the works undertaken by the UN with the help of allied organizations and motivated the students to take care and conserve the natural resources. Finally, it was the moment of pride with the presentation of UN Badge to the “Winner of the Day”, Shaikh Afwan Zahid of Class VI C, for his keen observation and follow-up of the presentations and his instant and accurate response to the queries asked. It was followed by the vote of thanks by Anaya and Dhruva. On the whole the assembly was informative, thought provoking and above all value oriented. The assembly concluded with the National Anthem of India. 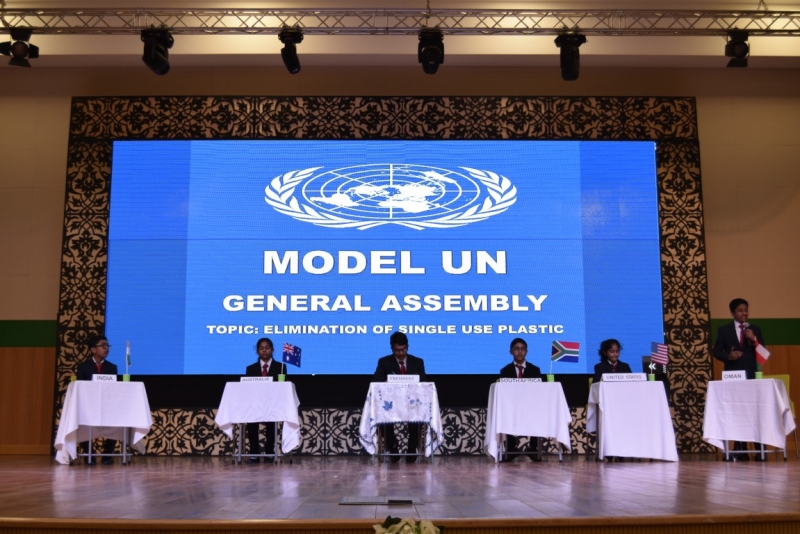